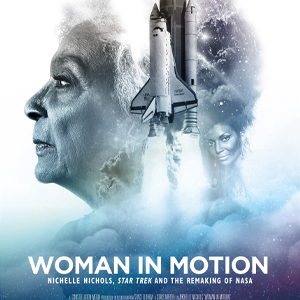 Astronauts in Space can now watch the film about how the original Lt. Uhuru recruited the first minorities and women to fly in space

ORLANDO, Fla. (August 27, 2021) — Stars North Films, Shout! Studios and Concourse Media are proud to announce that the feature documentary Woman in Motion has been uploaded to the International Space Station for the astronauts to watch at their leisure.

Additionally, the film is being shown to the NASA workforce as NASA marks Women’s Equality Day. NASA employees and contractors will have opportunities between August 26 and September 6 to watch the film. Showing a film to the entire NASA workforce has not been done since Hidden Figures in 2017. Not only is NASA celebrating Women’s Equality Day but also its own research mathematician Katherine Johnson who is the inspiration for Hidden Figures who was born on August 26, 1918.

Directed by Todd Thompson, the film chronicles how Nichols transformed her sci-fi television stardom into a real-life science career when she embarked on a campaign to bring diversity to NASA in 1977.  Nichols formed the company Women In Motion, Inc. and recruited more than 8,000 African American, Asian and Latino women and men for the agency. Nichols and her program continue to influence the younger generation of astronauts as well, including Mae Jemison, the first female African American astronaut in space. Despite an uphill battle against a bureaucracy that was initially hesitant to let her get involved, Nichols persevered and is credited by NASA for turning it into one of the most diverse independent agencies in the United States Federal Government.

Thompson said, “It is an honor for Woman in Motion to be in the company of films like 2001: A Space Odyssey, Apollo 13 and Hidden Figures on the Space Station, where the diversity onboard is a true reflection of Nichelle Nichols’s incredible efforts.”

Producer Tim Franta said, “I hope the Space Station crew has a movie night and watches the film together. It is only fitting that a film about astronauts be watched by astronauts in space.”

Matthew Shreder, CEO at Concourse Media, said, “Having this film on the ISS and shown to everyone at NASA is a dream-come-true for everyone involved. We are all honored and humbled to be included among the library of films made available to the astronauts and personnel who share Nichelle’s vision of equality for all.”

“I cannot think of a more appropriate film to share with the amazing crew of the International Space Station,” said civil rights attorney Ben Crump, who is also executive producer of the film. “Nichelle Nichols took equality to new heights and her message that ‘Space is for everyone!’ continues to inspire and motivate new generations.”

Crump linked the recruitment program Nichelle Nichols worked on in 1977 to NASA’s most recent effort: “In the spirit on Nichelle’s groundbreaking work, it is encouraging that NASA announced its new ‘Mission Equity’ program to further expand diversity and equal opportunity for all Americans.” More information on the program can be found here.

Woman in Motion is available on demand and digital and is streaming on Paramount+.

Stars North is an award-winning, independent, motion picture production company based in Orlando, Florida. The company actively pursues the development and production of original digital content and short and feature-length films, leveraging state legislative incentives that help support growth in the local economy and generate a continuous flow of work for cast and crew. Follow Stars North on Facebook and Twitter.

Concourse Media is a content agency that offers entertainment and technology services for clients and brands. It facilitates the packaging, financing and licensing of content across all forms of distribution. More than ever, it continues its mission of being a filmmaker-focused agency that supports the creative process from a foundational level. Concourse was formed as a vehicle for content makers to thrive in, and its model centers on bringing a unique and diverse set of voices to the forefront of today’s entertainment marketplace. Our leadership has been involved in the distribution of more than 40 independent films over the past decade. For more information on Concourse, please visit the company website at www.concourse-media.com .