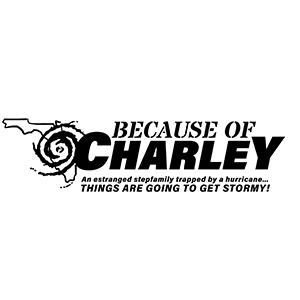 Because of Charley touches on topical subjects including race relations, gender equality and tolerance

Set in 2004, Because of Charley tells the story of an estranged, racially mixed blended family who reluctantly gather at a Central Florida home for an anniversary party, fully intending to keep the visit brief — but Hurricane Charley takes an unexpected turn that changes everything. As the storm strengthens and the relatives are forced to huddle together in a cramped hallway, their bitter resentments and differences — race, age, faith, gender, sexual orientation — come to a boil.

“This was a movie that needed to be made!” declared Amos, who joined the Florida-based cast and crew after reprising his role of Cleo McDowell in Eddie Murphy’s upcoming Coming 2 America (set to release December 18, 2020). “The role of Grandpa spoke to me,” he continued. “I felt that the character fit me like an old shoe.  And the complex interplay between the ensemble players was compelling.”

Principal photography was set for the month of September 2020 – the height of the pandemic and the peak of hurricane season. “It was a difficult decision to move forward, but worth taking the calculated risk,” said Executive Producer Lisa Enos Smith. “My business partner,

Jon Binkowski, and I chose to help members of the filmmaking community who have been adversely affected by the coronavirus. The cast and crew were thrilled to be working and participating in a film that is extremely relevant to what is happening in the world today.”

“We originally planned to produce an action comedy with beach scenes, car chases and stunt fighting,” explained Binkowski. “However, when we were faced with the ‘new normal,’ Lisa and I changed the direction of the film in a way that enabled us to shoot in a more controlled environment with a smaller cast on a faster timeline.” They shot their film in 21 days over four weeks in locations around Central Florida, including Celebration, Sherwood Forrest RV Resort (Kissimmee) and Oak Crest Mobile Park (Orlando).

To move forward with production, Smith and Binkowski adopted the Screen Actors Guild-American Federation of Television and Radio Artists (SAG-AFTRA)’s strict COVID-19 Safety Guidelines, a detailed set of science-based protocols enabling employers to provide a safe workplace. The duo’s meticulous, comprehensive plan encompassed a daily routine including having a certified COVID Compliance Officer on the set at all times; requiring that all cast and crew members sign in, complete an on-line COVID questionnaire, have their temperatures checked, and wear disposable masks; and many more procedures. All surfaces were cleaned at the end of each shoot day, and key crew and cast members were tested for COVID-19 every other day.

Because of Charley is produced by Smith and helmed by Binkowski, who also co-wrote the script with Stephen DeWoody (The Visitant). With fellow producers Gary Dean, Ben Kupfer, Patty Bender, Alexa Timon and Nick Sparks, they are making the film under their Renaissance Entertainment, LLC banner. Other leading members of the crew include Director of Photography Daniel Stilling, DFF (Criminal Minds), Casting Director Lauren O’Quinn (The Florida Project), Costume Designer Ann Closs-Farley (The Pee-Wee Herman Show on Broadway), editing by Kupfer, Enriquez and Binkowski, and an original score by  Lloyd Barry (Diary of a Mad Black Woman).

The idea for the film was sparked after Binkowski and his family endured Charley and three other hurricanes that crisscrossed Central Florida in 2004. “In fact, ninety percent of the cast and crew experienced the wrath of Charley,” he added. “Ours is a multi-layered film that will resonate with audiences for a lot of reasons.”

With principal photography wrapped, Smith and Binkowski are heading into post-production; they expect to submit Because of Charley to the film festival circuit early next year as they seek a distributor and / or buyer.

Headquartered near Orlando in Celebration, Florida, Renaissance Entertainment, LLC is a majority female-owned, full-service production company creating stunt shows, spectaculars and large format film for the themed entertainment industry. The company’s productions are located at globally-recognized theme parks and based on Hollywood’s biggest blockbusters, including The Bourne Identity, Pirates of the Caribbean, Lethal Weapon, F-Troop, Blazing Saddles, Maverick, Batman Forever and Waterworld. As an independent producer of engaging and cost-effective live action feature films, Renaissance has produced four feature-length films that have been distributed internationally and star such artists as Neil Brown, Jr. (Straight Outta Compton, SEAL Team), Mitchel Musso (Hannah Montana), Walt Willey (All My Children), the late Ken Osmond (Leave it to Beaver), Michael Windslow (Police Academy) and Issac C. Singleton, Jr.(Pirates of the Caribbean: The Curse of the Black Pearl). For more information, visit Renaissance Entertainment and follow on Facebook.